Setting Up Albums For A Workflow 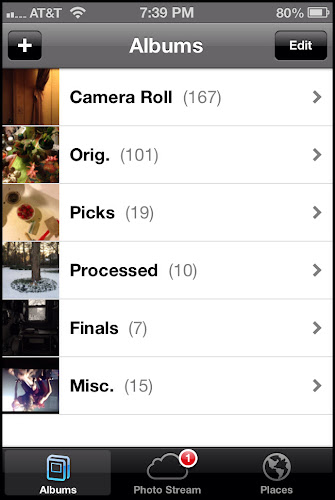 0) Camera Roll
All Photographs live in the Camera Roll no matter how many Albums you might place them in.
An Album is really just another way to view a selected group of images that again always live in the Camera Roll
Delete a Photo from an Album and it is still in the Camera Roll, Delete a Photo from the Camera Roll and it is gone!
All Photos, ScreenShots and any Tweaked Photographs Saved by another app will be saved to the Camera Roll
The Camea Roll can not be Sorted by any other criteria other than Creation Date (so in many ways it is useless)
1)Original
Most all Photographs we take go into this Album
What this means is the Photographs that are intended to be taken seriously (not the photos of where you parked the car so you can find it later, or of the bathing suit you just have to have but want to get confirmation from your wardrobe advisor. These actually get moved to 5) Misc.)
Unlike in the Camera Roll in the Albums one can move photos around albeit one by one. Click on the Edit button, touch and hold a thumbnail, it will enlarge just a bit and then you can move it to another position. This is useful when choosing between two similar images that are separated by others
2) Picks
Picks are where the photos get moved to from Original
We always move both pairs of Photos (in instances of shooting HDR or when an app provides versions of a Photo)
Once a Photo is moved into Picks it should be Deleted from Original (this is the procedure for all the Albums, we do not want to end up with the same Photos in multiple Albums)
The Picks Album is where we will go to grab Photos for Tweaking. Most Editing apps will allow you to Paste a Photo in from the Clipboard, or they will have a function for browsing your Photo Albums from within their app
3) Processed
Once a Photo has been Tweaked it is moved to the Processed Album and again Deleted from the previous Album (Picks)
4) Final
Once a Photo has been "Tweaked" in an app the new Photo is Saved to the Camera Roll. We then go into the Camera Roll and move it into the Final Album
In this instance we do not Delete the Photo after moving it to the Final Album because since it is in the Camera Roll if we Delete it from there it will be Deleted everywhere!
Note
I recognize that this might seem cumbersome but it is the only way to maintain any structure in our Workflow. Also, when we use PhotoSync to transfer Photos to the Desktop these Albums/Folders will be mirrored on the Desktop